Inns and taverns dot the rural lands of Verra, and serve as crucial waypoints between destinations. However, one tavern has a unique patron that not many would expect. A man by the name of Fent is the owner of the quaint establishment, and upon entering, patrons may notice a large furry mass in the corner. Closer inspection reveals it to be no less than a fully grown bear, complete with his own bear sized flagon of mead.[2] 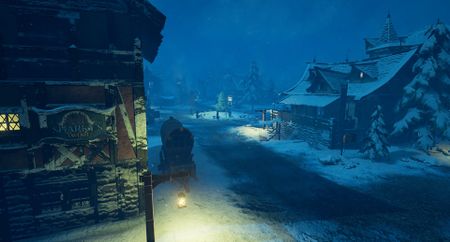 Taverns are a type of building that can be placed in צמתים or on דיור חופשי.[4]

Many adventures begin in a humble tavern. I’m sure many of you have memories from pen and paper adventures that begin in a small town, with a small town tavern and small town problems. Over time, it becomes a headquarters. You go there to rest, to eat, to hear gossip and meet friends. It’s a home away from home and your connection to the world when you’re not on a quest.[4]

Freehold buildings are able to be levelled up based on the length of time and productivity of the freehold.[7]

We want there to be progression in many systems and part of the freehold progression is that when you establish these base buildings the longer and more productive you are and exist with that freehold, the more opportunity those buildings will have to both level up: offering new bonuses, new abilities, new capabilities; and just surviving in this world is a feat in and of itself, so it's rewarded by allowing progression with those things.[7] – Steven Sharif

Our business owner system... grants players a meaningful existence in the world and rewards them for their persistence, dedication and survivability.[6] – Steven Sharif

There's no reason why you couldn't license your name to somebody else who also has a freehold and who also has an Inn and work together.[9] – Jeffrey Bard

Players will be able to buy food and drink from a Tavern, some of which will be supplied by the tavern owner or other patrons that they get their menu from. These consumables will offer tangible benefits to players that stay within a certain proximity of the tavern itself.[10][4]

If a player chooses to construct a tavern or a business on their freehold, they can offer food through that tavern and players who are visiting the area doing hunting quests can visit the tavern, eat food if it's available, and they will receive a buff that is proximity based essentially if they hunt around that person's business... Additionally that business can be upgraded through the access of additional blueprints as well as resources that need to be then poured into the building; and if they do so that proximity radius expands.[10] – Steven Sharif

Characters will have some agency over what consumables are available in taverns. This could be tied to supply quests or available resources within the region.[11]

Characters will have a defined region of agency over what is available in the different taverns, whether they be taverns located within the city or taverns located on a freehold; and those could be tied to supply quests that are then done by the players. They could also be regionally determined by availability of resources.[12] – Steven Sharif

If you're a tavern over on the western side you might have different grains, spices and mead there; and over on the other side of the world there might be taverns with completely different things.[12] – Jeffrey Bard

Player owned taverns on freeholds will be able to utilize NPC bartenders to distribute drinks that have been made for that tavern.[13] 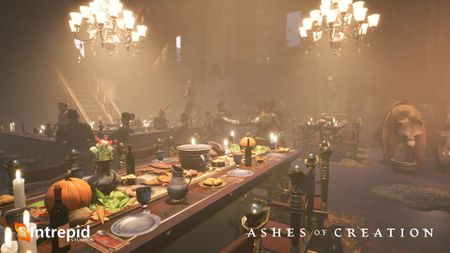 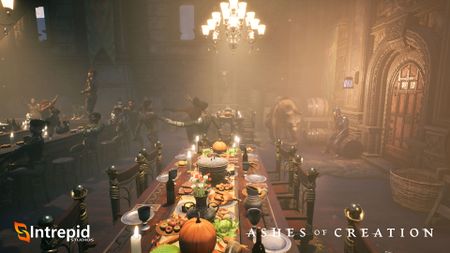 Inns and taverns dot the rural lands of Verra, and serve as crucial waypoints between destinations. However, one tavern has a unique patron that not many would expect. A man by the name of Fent is the owner of the quaint establishment, and upon entering, patrons may notice a large furry mass in the corner. Closer inspection reveals it to be no less than a fully grown bear, complete with his own bear sized flagon of mead. Fent and the beast harbor a strong kinship, and on a particularly raucous night, the two will even have a good wrestle on the tavern floor. Many have pressed Fent for the tale of his unlikely companion, and although it is one he is willing to tell, there's always a solemn gleam in his eyes when he tells it.[2]

Years ago, when Fent was still a young hunter, he was out during a particularly harsh blizzard. Every tree in the forest looked like the others, but as luck would have it, he stumbled upon a cave. Fent managed to get a fire going and intended to stay until the torrent outside ceased. While waiting, he fell asleep, but was startled awake when he heard something slowly creeping through the cave towards him. He quickly bounded up from the floor. A bear from deep within the cavern had wandered close to the entrance, and despite his fear, Fent slowly began to reach for his knife. The cave reverberated with the bear's roar as it charged. It knocked Fent down, but not before he managed to jam the blade deep into its neck. Fent kept blindly stabbing even as he was being mauled, kicking and gnashing against the beast. The bear struggled, then finally stopped. Fent laid there for what seemed like forever, straining to catch his breath. Eventually, he gathered to his feet with a wince. Amidst his senses, he began to hear a faint whimpering. A wayward cub had wandered its way to the grim scene. It mewled after its mother, yet there was no reply. Guilt welled up in Fent's body, even as his body wracked with pain. Feeling responsible for this young cub, he placed it next to him alongside the fire, and tried to nurse his wounds as best he could. After visibility had improved, he took the cub onto his shoulder, and slowly made his way back to his home.[2]

The cub proved to be troublesome to care for at first. He was almost always hungry, and Fent awoke several times in the middle of the night to the telltale clattering of the larder being raided. Fent deemed that the cub needed a dwelling of his own, and decided to place the beast within the shed. The cub would still mewl, despite the warmth of its new home. Although hunting, was Fent's primary vocation, he had a knack for brewing in his spare time. Fent decided to use some local honey as the base of his new brew. A concoction sure to quickly allow the bear to slip into the realm of sleep. After all, bears love honey. Months of experimentation had yielded a potent mead that, though quite a quantity was required, certainly put the bear out. Despite the circumstances, the bear looked to Fent as his caretaker, and the two began to trust each other. The beast had taken an unexpectedly great liking to Fent's mead, and in honor of his discovery, named his friend Mug.[2]

Years later, after deciding that brewing and running a tavern would be far safer than being a hunter, Fent opened his own. Mug is surprisingly capable in helping around the tavern, and after a hard days work, loves to relax on the floor with a large flagon of mead; usually alongside other equally relaxed floorborne patrons.[2]

Taverns offer private chat and voice communications for all patrons within the building.[4]

Music within taverns can be set by players.[4]

Owners of taverns are able to rent out rooms. The quantity and quality of rooms scales with the level of the tavern.[4]

משחקי בית מרזח are games that are played in player-built taverns or in-node taverns.[14]. Some will be dice games, others will be card games; and some will be less savory.[15] 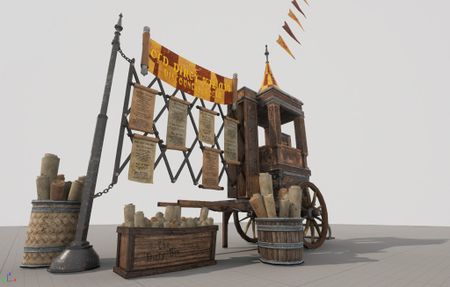 Bulletin boards are available within nodes[19] and player taverns.[4]

It is unlikely that there will be mechanisms to kick or ban people from player-owned taverns.[25]

There are plenty of mechanics for you to exercise your dislike of another player especially through PvP and we don't want to hard code in divisive systems, such as either excluding movement of a player character into a certain area, such as your Tavern; or banning somebody through that method.[25] – Steven Sharif

There may be a mobile application that allows players to interact with parlor games (tavern games).[26]

Taverns offer rested experience (rested XP) for those who rent rooms or spend time as patrons of the tavern.[4]

Players with a high enough corruption score will be visible on the world and mini maps. These players will have markers posted on the map by an NPC from a Military node of at least stage 4 (Town), and will only be granted to players who have the Bounty hunter title.[27] The accuracy of bounty hunter maps is determined by a player's progression in the bounty hunter system.[28]

Taverns are one of the locations that bounties will be posted. As players gain corruption, taverns may offer bounties to eliminate those players; or have a specific area cleared of problem players, thus giving a POI (point of interest) on the world map.[4]

Battle maps allow players to strategize, gain bonuses on planned attacks, and see the blueprints of attackable points. Whether attacking a node or castle, players will be able to discern defenses, analyze possible weak points and gain tactical advantages before the battle begins.[4]