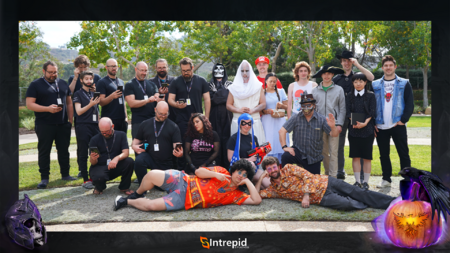 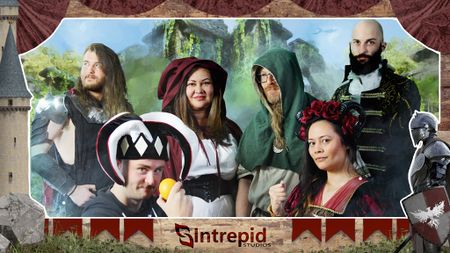 Intrepid Studios Inc. is a San Diego based game studio working on the MMORPG Ashes of Creation.[3]

Intrepid Studios was founded by Steven Sharif and John Moore, passionate gamers and successful entrepreneurs, who took their knowledge of business and passion for games and set out on a mission to make a gaming company that would build the games players want. Steven Sharif, set out to bring aboard a team of industry veterans, with a clear vision for the company’s first project. These titans of the industry hail from many backgrounds, but all share two common threads: AAA MMORPG development experience, and a passion for building the games players want.[4]

Everyone at Intrepid is focused on building games that help bring people together. Part of what makes us who we are is that ability to connect with others, and we adhere to this design principle throughout our development process. Since the beginning, Intrepid has held to the philosophy of making games with no pay-to-win or cash grab elements – we respect our players and believe that these tactics aren’t necessary if we simply build games that players want to play. That philosophy, combined with a commitment to transparency and communication with our community, reflects the most important values that we as developers can uphold.[4]

Intrepid Studios has embraced an open (transparent) development approach, rather than sharing information through carefully curated press releases and announcements.[5]

The delicate blend between a transparent development process, but also understanding that [the] majority of your player audience will not grasp, or will not take into context, what a work in progress looks like. So certain things we have to polish to the point where they're presentable; where they can be understood- again in its own context without my verbal support or Margaret's verbal support.[6] – Steven Sharif

I think that we live in an age where it's easy to be transparent if you're not trying to hide something. The downside is if you're showing something that's not a completed or finished product, it is incumbent upon the viewer to understand that fact.[5] – Steven Sharif

The whole purpose of our development process being transparent being open is that you don't have to buy a package actually to participate. You can be a voice from the community. You can observe people playing. You can give your experiences and feedback.[7] – Steven Sharif

There are obviously going to be some aspects of the development that we will not reveal, like lore and some system mechanics in order not to spoil the game for release.[9] – Steven Sharif

We have learned a lot from our partnership with MY.GAMES, and we wish our friends there all the best as we have mutually decided to part ways. Looking ahead, we’re excited to announce that Intrepid Studios will be opening European offices in Amsterdam to help support our publishing operations in the EU/CIS regions. We have recently posted open positions for our new EU offices, and look forward to hiring the best and brightest in true Intrepid fashion.[21] – Steven Sharif

The Ashes of Creation MMORPG will not be published on the Steam platform.[22]

The gaming industry can be a turbulent storm of hiring cycles and layoffs. We’ve set out to do something different, to break this cycle and create an independent studio capable of withstanding the chaos of this industry. We’ve brought on-board a team of professionals that hold a diverse set of skills, and who all share a singular goal: making fun games. The studio is designed to be an open place for collaboration and communication, a place that is conducive to team building and success. Our goal is to build a family that will laugh together, play together, succeed together, and stay together.[4]